I’ve not posted in a week or so, due to so much traveling! Between DC, NYC, Cancun, Harlingen TX… life’s been a whirlwind.

Despite the travel, and subsequent sore throat (for some reason there’s yelling involved in dancing in Cancun), I’ve managed to do some creative projects, as I tend to do. 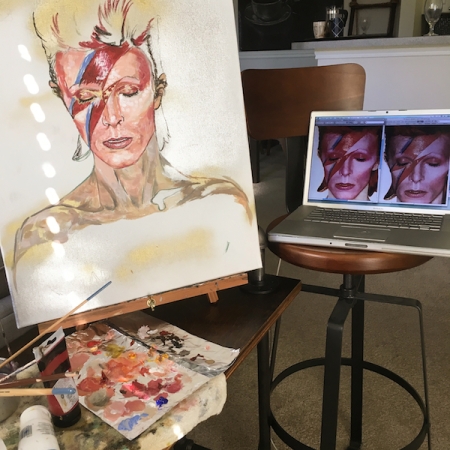 I started a David Bowie painting a few weeks ago, and lately added a new layer. I don’t quite like the painting yet… and I’m trying to figure out a way that I can grow to like it. In essence, this painting is simply not my style. To be truthful, I’d have preferred to paint a different photo of David Bowie. However, I attempted to paint this one on a request I received, and after all, it is an iconic album cover. I think, in time, I can fix it so that it is more enjoyable for me, but for now it remains as is:

I also made T-shirts for some very good friends of mine who are tying the knot soon. I tried to make the shirts as silly as possible. Initially, I thought to put “I heart ___” on each shirt, one for the bride and one for the groom. But, it occurred to me, upon seeing photos of them with a prop parrot, that I had to include some pictures.

I did not take very good photos of the shirts; I apologize. This above is the bride’s. The groom’s was similar, but green, with the bride throwing a kiss to the parrot.

I also made a cauliflower pizza at some point over the past few weeks. It was a very ambitious undertaking, and we were dangerously close to starting a massive fire, but it came out beautifully. 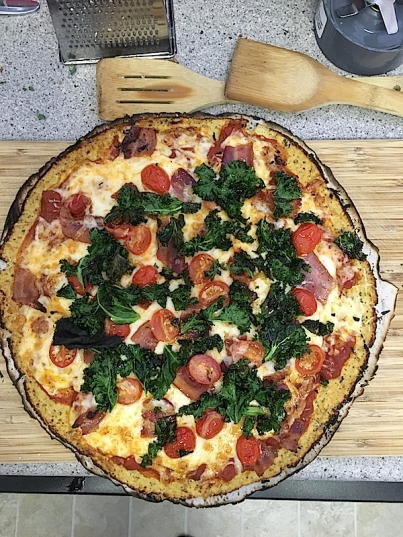 Finally, I’ve been taking practice photos of my artwork for Instagram. Yes, I’m on Instagram now. It took a while for me to really understand it… and I’m still proceeding very slowly, with overt caution, toward this new social medial frontier. I’ve realized it could be a great tool for my artwork, so I continue the journey. Here are some of the shots I’ve taken: 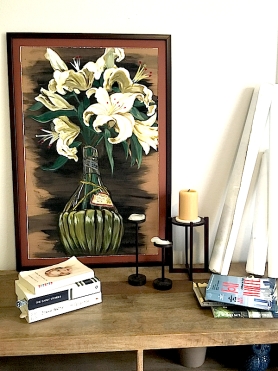 I really want my Instagram to have a style… I want to showcase my work in a way that reflects the mood of my art. It’ll take some practice to get one down. And, I haven’t mastered “hashtags” yet (I still call them number signs. As a human, I admit that I resist change), so don’t get too excited.